Playing with melody and rhythm dates back to ancient times (and not meaning early 60’s or so).
Since people had developed first musical instruments and realized it’s a great form of spending leisure time, music’s expansion and evolution began.
No wonder that the game industry took up the topic very early. First music games were developed in 1970s, for example Simon electronic game: 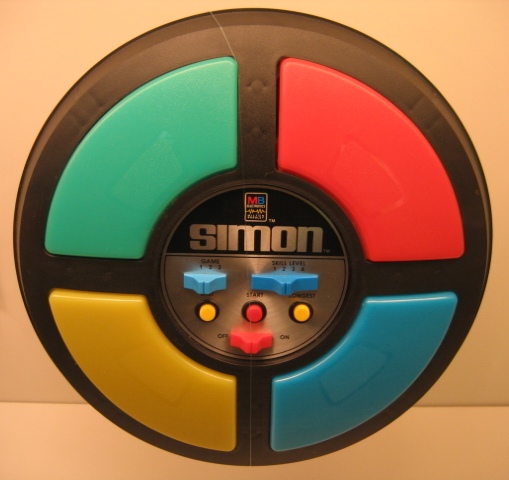 From then, many electronic and video games came up, challenging people’s sense of melody and rhythm. I’m not going to do here a history lesson, so I won’t be going over games in completely chronological order. I’d rather categorize games into several subtypes based on distinctive features and draw some conclusions from it. We’ll see how it goes.

I’m all about the… rhythm

First music games revolved around the beat. In most cases the target was to press button at the right time, which was indicated by specific marker shown on the screen. The evolution of that idea went through a lot of changes, but the core stays the same even now. Let’s see how rhythm-focused games evolved.

Rhythm game about the rapping dog was quite a hit because of it’s great aesthetics and taking up rap music boom as the music background. We had an indicator going on the straight line filled with moments, during which we had to press corresponding buttons. At some parts we had a place for “freestyle” which will be used later by a few games. The difficulty level was well-balanced, reward system for score perfection was great and music was really catchy. It’s worth checking out even today.
UmJammer Lammy is almost the same but hits on the rock music and freestyling here is more rewarded. Gameplay seems pretty much the same. However, it gave us multiplayer mode which is worth mentioning.

Game made by Bemani, a Konami’s division (yes THAT Konami that everybody “loves” nowadays). Firstly introduced to the world through an arcade machine with DJ-like interface consisting of 5 buttons and a turntable, later simplified to gamepad interface on PSOne. From that game we can distinguish a “music highway”, which will appear in numerous games later on. In Asia further iterations are staggering hits until now. Some of those were published in U.S. and Europe with the soundtrack adjusted to respective markets. Not everybody like jazzy-funky-electronic J or K-Pop, right?

This is the game closest in mechanics to Simon mentioned in the beginning (I’m serious) but in weird, Japanese, sexy way… We commence different actions (dance, shoot, etc.) by memorizing what happens on the screen and acting according to the rhythm. The funky feeling of the music and gorgeous graphics (at that time) provided existence of another iteration and ports to other consoles. It’s sad that Dreamcast dropped dead somewhere along the way – we could’ve seen more of the Ulala (our main character) now.

Ah… my personal favorite from Harmonix (we will talk about them later…). Tremendous soundtrack and another iteration of “music highway”. This time simplified and complicated at the same time. Song is split into separate parts: drums, vocal, guitar, etc. Each part has only three buttons to press and look after. Also, when we hit 2 subparts without mistake whole part for a short period of time plays automatically – sounds easy? Watch the video and think again. We had to plan and switch between those parts to have a fluent music playthrough. Also, along the way we have quite a few bonuses to make our life easier (slow-motion, autotrack) or double our scores, which added another sense of tactics to the game. Also, we had multiplayer here in which bonuses were a bit different and instead of helping us out in some cases, they made our opponent’s life harder.

That game was a piece of work. Not only the soundtrack consists mostly of the best of a classical music pieces but that game really used analog possibilities of PS2 Dual Shock (yes – if somebody didn’t know that – DS2 was recognizing degree of the button pressure).
Mechanics at the first glance was quite easy – four buttons, keep the rhythm. But there’s more – we have to watch the accent meter to apply appropriate pressure to the buttons.
Quite a feature to consider, right?

This is one of the best rhythm-based games because of the humorous story, nice, stylish graphics and unconventional approach to the gameplay sequences – it’s like a set of quick time events where simple movements were mosty connected with geometric buttons and guitar gameplay with solos corresponded to analog stick movement. Indicators for movement were bouncing around the whole screen but kept focusing at the center with geometric buttons. Instructions for analog sticks however looked like a melody way to move along. Some of these elements are now parts of the touch-based games but we’ll talk about them later.

Japan Studio One always busted through new doors on every Sony gaming system. This time, imagine this: you’re a god of the mysterious tribe called Patapon. You communicate with them through drums by pressing specific combination of buttons in 4/4 rhythm. There’s no actual indicator on the screen which button we press when. The only helpful tip is the regular blinking screen’s edges. And finally: it’s a 2D real time strategy with the side view. Sounds crazy? It is, but in a good way. This game will make you bounce that 4/4 rhythm even if you’re not playing it! It will test your sense of strategy, economy and above all, rhythm. One of the best games on PSP console and in my opinion, one of the best music games. Ever. Patapon, aside from simplicity and original usage of rhythm had a distinctive feature – even if we have hearing loss or don’t feel beat at all, that blinking rhythm indicator made the game accessible for everybody.

So what’s the conclusion here? All of these games have pre-designed levels, some of them have music tracks specifically made for. The gameplay, however original may seem, is mostly focused on playing according to the rhythm. Games presented above, in terms of music / rhythm gameplay gave us concepts of the music highway used in many titles later on, focusing indicators, philosophy of “simple interface, complex level”, shared / split screen multiplier with gameplay add-ons to make competitive gameplay more interesting. Many of these elements we’ll see in other games that I’ll describe in further posts.

Feel free to comment and share your thoughts especially if you’ve found any rhythm-based game with some original features that I haven’t mentioned here.

In the next part I’ll write a few words about music games with unusual interfaces.